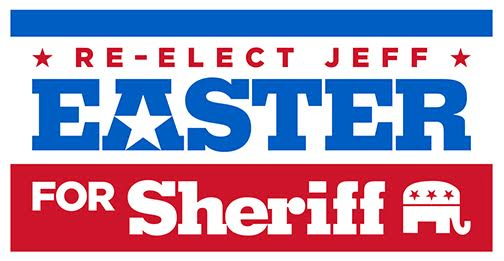 Sheriff Jeff Easter is a native of Kansas and received his Bachelor’s Degree in Leadership and Management from Friends University in Wichita.

Sheriff Easter began his law enforcement career with the Wichita Police Department (WPD) in 1989. During his career with the WPD, he worked as an officer, detective, sergeant, Gang/Felony Assault Lieutenant and was the Captain at Patrol North when he retired from WPD in 2012.

In 2012, he was selected as the Sheriff for Sedgwick County and after completing the New Sheriff Training at KLETC, Jeff took office on December 17, 2012.

Honors and affiliations include:

Sheriff Jeff Easter continues to serve on many boards within the community.  He is currently the Board Chair for the Mental Health and Substance Abuse Coalition and the Criminal Justice Coordinating Council.  Sheriff Easter serves as a board member on Ascension/Via Christi Board of Directors and the Exploited and Missing Children’s Unit Board.

As sheriff, how would you address the perception of bias towards people of color and racial injustice?
Currently the way the SCSO addresses this issue is by requiring each deputy receive Bias Based Policing training once a year. During recruit training, deputies receive the training as well. During the recruit academy deputies are exposed to a variety of topics including, Diversity Training, Interpersonal Communication Skills Training, Crisis Intervention Tactics, Dealing with Difficult People Training and Conflict Resolution Skills Training, to name a few. We are currently looking at our curriculum to enhance Diversity Training to encompass civilians teaching on the various cultures that make up Sedgwick County.

With the increase in deaths from firearms, including suicide, what policies would you pursue to reduce deaths by firearms?
I don't believe there are any policies to pursue. Anything dealing with deaths from firearms would have to come from changes in State Statute which is governed by the legislation. I do believe in the 2nd Amendment, however, I believe the State of Kansas could tweak the laws to require an extensive background check and firearms training prior to lawfully possessing a firearm.

Do you support community oversight of law enforcement? If you do how would you encourage community participation in law enforcement oversight?
I do not support community oversight. I do support entering a partnership with the community to make positive, substantive, and sustainable change. Currently, the law requires any law enforcement agency that employees more than 50 personnel to have a Community Advisory Board. The SCSO has such board. The board is instrumental in contributing to changes in policy, discipline being administered and quality changes in the jail setting.

Do you support rehabilitation programs in prison, jail, and in the local community? If so, how would you advocate to continue expanding funding for these programs?
Absolutely I support rehabilitation programs in the jail community. I am the chair for the Mental Health and Substance Abuse Coalition in which this is a big topic we are trying to fix. Next, the SCSO started the Score Program 2 years ago. We assist inmates in looking for shelter if they are homeless at the time of release from the jail. We provide mental health help at the time of release. We currently have a large need for mental health care in the jail and provide the care through our medical provider. At the time of release we assist in the continuum of care to our local providers. We provide substance abuse counseling while they are in custody and then assist looking for outside care for the inmate once they are released. We help inmates obtain Social Security and State ID cards. We work with KansasWorks to help the inmate find a job at the time of their release.

Do you support sending young offenders to restorative justice programs and other avenues that divert young people out of the juvenile justice system and toward new opportunities? If so, what would you do as Sheriff to promote these programs?
I do support the restorative justice programs. However, I have seen in the last two years juveniles take full advantage of the system by committing several more crimes and telling us and the judge that due to the new laws they don't go to jail so there is no reason to stop committing minor crimes.

If the juvenile takes advantage of the opportunity that was given to them, then I think the programs are worth while. I have supported Judge Riddel's Boys Ranch for years. However, when the State of Kansas de-funded the program, Sedgwick County had to shut their doors. I would fully support bringing back such a school if funding was available.

Many people are too intimidated to go into a Sheriff’s Department to file a complaint. How would you reduce this barrier to community feedback?
I do not find that people are intimidated at all anymore. In fact, citizens make complaints either in the jail or on the commissioned side quite often. We take every allegation seriously and either investigate the allegation internally or criminally depending on the nature of the complaint. We also take complaints over the phone or over email. They do not have to come to the office to initiate a complaint for us to investigate the complaint.

Your support for Jeff Easter for Sheriff is greatly appreciated!

Paid for by Jeff Easter for Sheriff, Sheila Tigert, Treasurer